Draft Introduction to Chance of a Lifetime (1950)

I haven't posted any blogs here since I moved to China in August 2018. I am working on several projects at the moment, and will therefore publish here some thoughts about those projects and drafts of papers/chapters I am working on.

The first is the Introduction to a paper I am writing about the 1950 movie, Chance of a Lifetime. I have been thinking about this subject for quite some time, and I am delighted I can now get around to writing. Comments welcome. 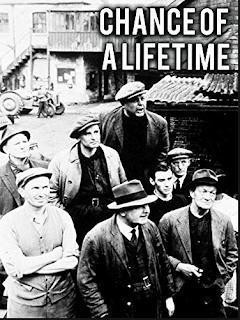 Looking back, the black-and-white postwar images seem appropriate. Life in peacetime Britain was grey, threadbare, dreary and hopeless. There was a national sense of “Was this what we fought for?” As one American commentator put it, the British certainly believed they had won the war, but they behaved as though they had lost it (McCrum, 2009: 6).

Chance of a Lifetime (1950, dir. Bernard Miles) represents a cinematic bridge from British movies made in the Second World War to the realism of the ‘angry young men’ kitchen sink dramas of the late 1950s and 1960s. Conceived by director/actor Bernard Miles in 1947 (the year of Britain’s coldest winter of the century), Chance depicts in microcosm worker-management relations at a time of economic austerity, continued rationing, strikes, and the British government’s export push for the manufacturing sector.

This paper centres on the film’s portrayal of class relations and in particular the recovery of the middle classes, represented in Chance by Adam Watson (played by Kenneth More). When neither owner nor worker can run the factory successfully or efficiently, the middle class takes over its management in co-operation with the owner. While offering a narrative around cross-class collaboration in difficult times – a legacy of the war movies made in the 1940s – Chance positions the middle class and the owning class as the saviours of the factory. At the end of the film, the workers are apparently happy to return to their rightful place on the workshop floor, albeit with greater respect for the responsibilities of management.
My analysis takes as its starting point Neil Rattigan’s essay, ‘The Last Gasp of the Middle Class: British War Films of the 1950s’, written for Wheeler W. Dixon’s collection, Reviewing British Cinema, 1900-1992: Essays and Interviews (1994: 143-53). Rattigan argues British films made in the 1950s about the Second World War attempted ‘to bring about a return of the repressed middle class’ and reflect a ‘fear that the middle class had lost social and cultural centrality within British society during the war because of the demands of a people’s war’ (ibid.: 145). The election of the Labour government in 1945 following the largest swing ever recorded in a British General Election (10.7 percent from the Conservative Party to Labour) confirmed that returning to the status quo ante bellum was not an option. Rattigan claims that the war films of the 1940s ‘rewarded’ the working class for the part they played in the conflict, but portrayed them using stereotypes and comical motifs. Robert Murphy writes that British films during the war were concerned with the conflict’s ‘transforming effect … turning timid, ineffectual civilians into warriors and war workers, as if the war were a blessing which enabled people to realise their potential’ (Murphy, 2009: 223).
In contrast, the war films of the 1950s ‘represented a reflection of and a contribution to a last-ditch effort by the dominant culture to “keep the lid on” the British social revolution, an effort complicated by a middle-class “backlash” against the way in which images of a people’s war had given emphasis to the working class and taken the middle class for granted in wartime propaganda’ (Rattigan, 1994: 149). We might even go so far as to suggest that Chance of a Lifetime confirms Rattigan’s thesis of nostalgia for a time when ‘the British stood together in their various social positions, united in common goals and communality’ (Rattigan, 1994: 150, original emphasis).  By the end of the film both workers and management have worked together as they did in the war, but this time for the benefit of the factory, and they all return to their rightful positions in the social hierarchy. Only More’s character, Adam Watson, has been elevated to management. This was the basis of the communist Daily Worker’s critique of the film:

[T]he film sets up a situation where the workers are bound to fail, and then gives the impression from the failure that workers everywhere could never run a business without the boss. Anyone seeing it would come away with one main impression- that the workers can’t do without the boss, that they should collaborate with him’ (Daily Worker, 11 May 1950).

While this assessment is not without its merits, it fails to understand the contribution of the middle class in pulling the factory into a modern era of both production and management.

I acknowledge the detailed history of Chance provided by Vincent Porter (1999: 181-199) in his essay, ‘Feature Film and the Mediation of Historical Reality: Chance of a Lifetime – a case study’. Porter offers deep background on the development and production of the film based on interviews (most notably with Bernard Miles) and archival research, as well as audience responses to the film gleaned from Mass Observation surveys. Porter describes how, ‘In a sense, Chance of a Lifetime was the first truly neo-realist British film. It was not only one of the first non-studio feature films to be made in Great Britain, but was also the first to be made about a contemporary subject which used real locations, both out-of-doors and inside genuine houses, factories and pubs’ (Porter, 1999: 187).

McCrum, Robert (2009), 'The Second World War: Six years that changed this country for ever', The Observer, 23 August.